Red Line Art Works exists to highlight art that engages with big global concerns. These are our Annual Awards given for art works we received in the year 1st January to 31st December 2019.

Each year we make two Awards, one for a Series of art works and one for an individual art work. We wish we were able to make several Awards - many of the artists here made work that is deserving of an Award.

If you look through our Main Gallery you will see art works from around 45 countries all over our planet. This list is steadily increasing.

Both of the Winning works this year have impressed audiences, in the arts and across the wider public. We congratulate the two Winners and all the artists whose work was 'Highly Commended' (see below).

In today’s troubled world there is an important role for art which helps people to reflect on what is wrong. These art works are great examples of that and we are pleased to show them to our global audience.

THE WINNER OF OUR ANNUAL AWARD FOR A SERIES OF ART WORKS IS FIONA CAMPBELL (BRITAIN) FOR SEVERAL SERIES OF WORK SHOWN TOGETHER : Examples of 'Snakes and Ladders', 'Glut' & 'Accretion' and are shown in our Main Gallery. 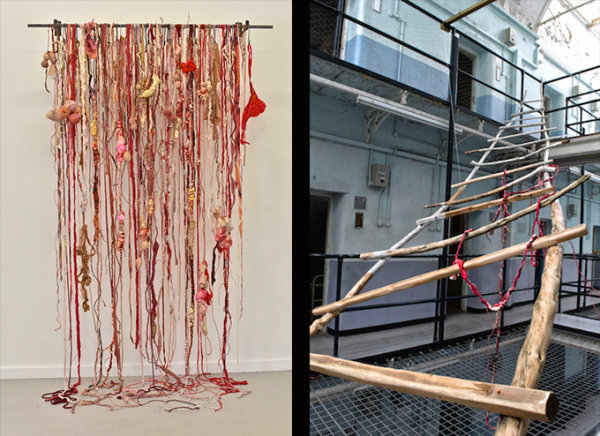 Fiona is a UK-based Artist and Curator who tackles environmental issues. Her work blurs boundaries between sculpture, drawing and installation. Connections between line, growth and energy, interconnections from micro to macro, and transformation are overarching themes in her work. The second example of her work here is set inside a disused prison, so this also brings into play several themes around incarceration.

Fiona : "Pressing concerns about human exploitation of nature, (of which we are a part) and over-consumption inform the content, taking my work into the realm of artivism. Rooted in anti-consumerism, my use of reclaimed and discarded materials relates to the issue of waste. It belongs to a wider subject of our relationship with matter, nature, and ourselves. Materiality and process are central to my practice. The work is hand-made and labour-intensive - the action of making often intuitive, time-consuming and repetitive. Collecting materials is intrinsic to the process. I approach materials as anti-hierarchical, upholding that ‘everything in life is in essence biological’ (Le Corbusier)."

So, these art works remind us that our societies, our institutions, and we are all implicated and complicit in the climate and ecological emergencies, as well as in State policies of incarceration. In looking at (or making) art we are not neutral or innocent viewers, we are always to an extent looking into a mirror. We may feel uncomfortable when we see unpleasing reflections of ourselves or humanity as a whole, and the collective calamity into which we have put ourselves. Today the best art is an unambiguous activation - pushing us to stay connected with and alive to life’s full realities, helping us come to terms with our full humanity. We may live under political systems which press us to be highly individualised but in reality we share our common planet, our common problems - and our common responsibilities. We have always been globally interconnected - within our species, across species, with all the other life forms on earth (the current Coronavirus pandemic should remind us of that), and with the health of the whole planet itself.

Art can distill and reflect complex situations and show us key truths we must not forget. This level of direct honesty and truthfulness is now absent from most politicians, the mainstream media and many institutions, so the importance of those art works and artists that 'tell the truth' has become vital. This is evident throughout the whole body of Fiona's series' and individual pieces. You can see more of Fiona’s work in our Main Gallery here.


THE WINNER OF OUR ANNUAL AWARD FOR AN INDIVIDUAL PIECE OF ART IS JEREMY WOLF (USA) : for his work ‘Here We Are With What We Have Done'. 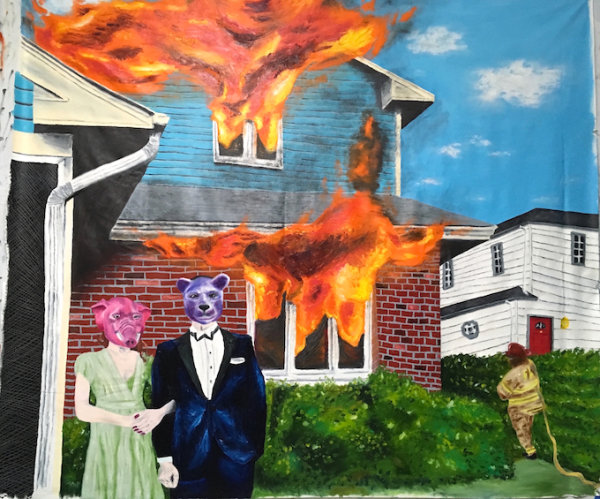 This painting resonates with some previous art works which have presented couples, for example Grant Wood's famous and deeply ambiguous 'American Gothic' painting of 1930 (see it here), in which a man and woman stand facing us, in front of their house somewhere in the American mid-west. There have been many interpretations of the 'meaning(s)' of Wood's painting which has been much conjectured and disputed since its creation. It has also been variously adapted, parodied and satirised from many viewpoints.

However, Jeremy Wolf's painting is not actually referring back to Wood's painting. It stands on its own merits and is not at all ambiguous, it is very directly related to its time and not just to America, but to the whole world and the predicament of all humanity - 'Here We Are With What We Have Done'. It is a focused, accurate and critical distillation of the current parlous state of the most economically and militarily powerful country in the world - and the whole world.

• "They are as children, playing with their toys in a house on fire." - Gautama Buddha, (believed to have lived sometime between the 6th and 4th century B.C.)

Jeremy's painting does not relate solely to today's global climate emergency. Jeremy : "A couple stand obliviously as their house burns behind them. The image captures the state of affairs in America after the series of events that culminated in the election of Donald Trump as President in November, 2016.

Much of my figurative work explores themes of identity, power dynamics, and relationships between persons and groups. Recent paintings continue to react to the seismic shifts in the current American political landscape, the subsequent effect on society in and outside of the United States, and the changing concept of what it means, and has meant, to be an American both at home and abroad.

American moral authority and influence has waned across the globe with the rise of neo-conservative and then alt-right views in the mainstream body politic. By blurring the lines between truth and falsehood, these actors have created a society of mutual distrust and suspicion. I try in my work to capture and reflect on the resultant layers of disappointment, fear, and exhaustion present in these times."

You can see more of Jeremy's work in our Main Gallery here.


EACH OF THESE ARTISTS ARE HIGHLY COMMENDED FOR THEIR SERIES' OF WORKS :


EACH OF THESE ARTISTS ARE HIGHLY COMMENDED FOR THEIR INDIVIDUAL WORKS :