"Consider in 1945, when the United Nations was first formed, there were something like fifty one original member countries. Now the United Nations is made up of 193 nations, but it follows the same structure in which five nations control it. Its an anti-democratic structure." - Adolfo Perez Esquivel


"The United Nations remains our most important global actor. These days we are continuously reminded of the enormous responsibility of the Security Council to uphold international peace and stability." - Anna Lindh


"The United Nations has a critical role to play in promoting stability, security, democracy, human rights, and economic development. The UN is as relevant today as at any time in its history, but it needs reform." - Chuck Hagel


"If they don't give you a seat at the table, bring a folding chair." - Shirley Chisholm


"We believe that representative bodies should be democratically elected and work to establish a UN Parliamentary Assembly to complement the appointed diplomats of the General Assembly. We work to ensure that these structures remain democratic and just." - World Federalist Movement – Institute for Global Policy


"If the United Nations does not attempt to chart a course for the world's people in the first decades of the new millennium, who will ?" - Kofi Annan


“The origin of all power is in the people, and they have an incontestable right to check the creatures of their own creation.” - Mercy Otis Warren


"The cheap 12 inch square marble tiles behind the Speaker at the UN always bothered me. I will replace with beautiful large marble slabs if they ask me." - Tweet by Donald Trump
Introduction

1. In theory, we the ordinary people of the world have the United Nations to work on behalf of us all. Since it began in 1945 many Agencies of the U.N. have done excellent work around the world. However, under the U.N's 'watch' many wars, famines, acts of genocide and enormous human rights abuses have been done (and are being done still), without the U.N. preventing them before they start, or stopping them after they start.

2. Great work has been done by many U.N. Agencies and other NGOs, but too often they are asked to use their amazing skills and experience to apply small or temporary 'sticking plasters' over big problems. Or they have to try and carry out humanitarian tasks in parallel with disastrous conflicts, while the U.N. itself fails to stop the conflict, making the humanitarian tasks much more difficult and dangerous. 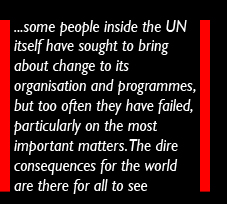 3. In each generation, some people inside the U.N. itself have sought to bring about change to its organisation and programmes, but too often they have failed, particularly on the most important matters. The dire consequences for the world are there for all to see (just look through these 'Global Concerns' for example).

4. It has been obvious for several decades that the operation of the U.N. Security Council (reflecting the unresolved differences of the old 'superpowers', stuck in a grimly rigid status quo) is too often part of the problem, not part of the solution. These superpowers do not look like they intend to change this soon - for example by reducing militarization, by destroying weaponry, by getting rid of nuclear weapons, or by stopping all the different forms of arms proliferation, including nuclear proliferation. That is before we even mention : the UN's failure on Climate Change, the permanent condition of hunger and poor nutrition suffered by hundreds of millions, the repeating cycles of famine in which millions die (including the current emergency across east Africa and the Yemen caused by bad governance and human created conflicts). In both these cases people are NOT starving to death : They are BEING starved to death by factors which the UN should be reducing and removing. Poverty and famine are always political, there are always political causes. Poverty and famine can always be resolved by political actions, changes of policy or new policies.

5. Whenever tensions arise between any of the old 'Superpowers' (China, Russia and the US) it casts a shadow over the whole world and raises the risk that conflict will escalate. Often these conflicts are being fought out in 'proxy wars' where the opposing forces have the overt or covert backing of Superpowers. Examples currently include eastern Ukraine and Syria with, in each case, opposing forces backed by Russia and the US. The Syrian conflict is (in Spring 2017) entering its 7th year. The whole world watched the massacre of men women and children in Aleppo in late 2016 while the UN did nothing to stop the carnage.

6. The global arms industry feeds and feeds off such tensions and conflicts. It is always heavily involved, doing its best all over the world to increase militarization, increase weapons sales and to overtly or covertly supply arms to existing (or potential) zones of tension or conflict. Often, the only way these activities have been opened up to public knowledge is through the brave actions of non-governmental organizations (NGOs) or Whistleblowers. See our List of Whistleblowers here. The UN has never been the leading agency for bringing us the truth about this awful global trade. It should be far more active in shaming the corporations and governments who supply or deal in arms. It should have - a long time ago - brought in more comprehensive international Laws and real accountability for arms dealers and all the other criminal participants in this industry. The UN should be ensuring the International Criminal Court is investigating and prosecuting the thousands of criminals in corporations, goverments and arms dealerships - there are many thousands of them around the world who are currently operating with impunity. Whatever it claims to be doing is not good enough.

7. Governments and international bodies (e.g. : the IMF, the WTO, World Bank, UN, EU, ECB, ASEAN, G7, G20, and others) are the architects of the international order that have allowed this to come about - and to continue. Through their promotion of a global neoliberal ideology they are entirely complicit in letting the global arms industry develop. Over recent decades the introduction of massive 'trade deals' are currently increasing the 'freedoms' of all corporations to do as they wish - including the corporations in the global arms industry.

8. These trade deals all contain multiple measures which 'free up' corporations to expand their people-and-planet-wrecking activities, simply in order to make more money for the already rich. This illustrates a fundamental point about our existing world order : a fundamentalist neoliberal ideology dominates it - and all our futures. This illustrates the enormous responsibility which our international institutions must take - and soon - for all the global concerns set out on this website.