“The USA is a beautiful country...when you take the corrupt corporations and their government minions out of the equation.” - Steven Magee


“The growing wealth aquired by them [corporations] never fails to be a source of abuses.” – President James Madison


“Steal a little and they put you in jail, steal a lot and they make you king.” - Bob Dylan


“Big business is not dangerous because it is big, but because its bigness is an unwholesome inflation created by privileges and exemptions which it ought not to enjoy.” - Woodrow Wilson, 1912


“Capitalism is a social system owned by the capitalistic class, a small network of very wealthy and powerful businessmen, who compromise the health and security of the general population for corporate gain.” - Suzy Kassem


“Very few of the common people realize that the political and legal systems have been corrupted by decades of corporate lobbying.” - Steven Magee


“We live in capitalism. Its power seems inescapable. So did the divine right of kings. Nay, human power can be resisted and changed by human beings.” - Ursula K. Le Guin
Introduction

1. There are numerous global ‘tie-ups’ joining those in political or economic power with the wealthiest (tiny) proportion of the world’s population. In truth, the crucial power globally now lies in the corporate sector and not in the political machinery of governments, whether democracies or not. 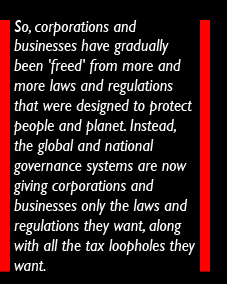 2. In particular, big and powerful corporations are accountable only to themselves, (not to national governments or to global citizens at large). Over recent decades they have pressed politicians and political parties around the world to gradually 'free' them. This was exemplified and amplified by the Reagan era (in the U.S.A.) and the Thatcher era (in the U.K.) which pushed neoliberal capitalism into its current dominant role in determining the fates of countries and peoples all around the world. In the USA the repugnant Trump has pushed this into clear neoliberal fascism - its potential for national and global harm is enormous.

3. So, corporations and businesses have gradually been 'freed' by neoliberal capitalist politicians and governments from more and more laws and regulations that were originally designed to protect people and planet. Instead, the global governance systems now give corporations and businesses only the laws and regulations they want, along with all the tax loopholes and tax havens they want. For the past three or four decades Corporations and businesses have increasingly been 'free' to do what they want with the world's capital, resources, people and environment - well beyond the control of governments or citizens. And, as humanity heads into our global Climate Emergency we must not forget that two-thirds of man-made global warming emissions are produced by just 90 corporations - Chevron, Exxon and the BP corporation being the biggest polluters.

4. This neoliberal 'Corporatism' already determines the fate of most countries around the world and it seems certain to dictate the future of the planet in the coming decades. Corporatism has very widespread negative effects around the world. For example, most of the damage to economies and citizens around the world is being done by a few thousand big international corporations acting with psychopathic greed on a global scale. To these people 'Greed is Good' - the planet and its people do not matter (except them and their people, of course).

5. In many countries the company laws under which these corporations exist actually require them to act solely to maximise their shareholder's profits. So, paradoxically, it is illegal for them to conform to any other needs - regardless of the damage they are doing to societies and the planet. Our politicians and political systems are therefore fully complicit in the damage being done because they create and leave in place the laws and regulations which allow this to happen.

6. The spectacular scale of the recent systemic failures of ‘Casino Capitalism’ around the world are all too obvious. These failures have taken place inside the Banking and Finance industries and damaged numerous other industries and populations. These systemic failures have also brought several nations to their knees and tripped many other nations into a newly dominant ideology under the name of 'austerity'.

7. Only feeble steps (if any) have been taken to sort out Banking and Finance - the industries at the very core of the global capitalist economy. It is very clear that 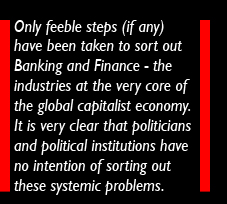 politicians and political institutions have no intention of sorting out these systemic problems. So, more big problems are already appearing and more crises will develop in future and impoverish the majority of the world's population.

8. This 'Corporatism' has been undermining real democracy and social progress in many parts of the world for a very long time. It undermines and works against the most fundamental needs of both people and planet. History shows that concentrations of power have also been monumentally disastrous in communist states. All over the world, the workings of governments and corporations are not transparent enough or sufficiently accountable to the people.