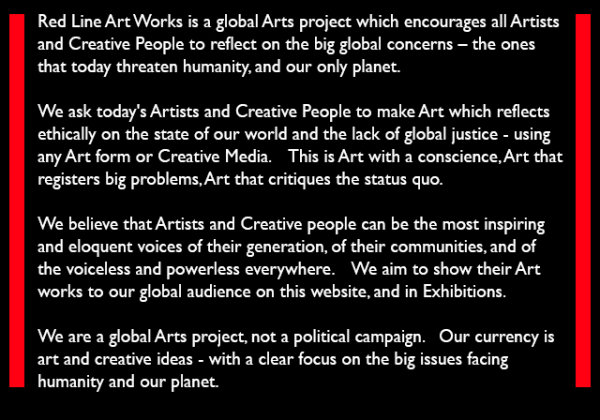 1. You might sometimes hear people (for example politicians) say that something is a 'Red Line', beyond which they will not go. That is the way we feel about the current dangerous state of the world into which our so-called 'leaders' (e.g. in politics, corporations, finance, the media, etc) have led us. The United Nations says we are in both a Climate and Ecological Emergency.

2. So, we want a much better, ethically and morally just world - capable of sustaining ourselves and life on this planet for future generations. But we are facing a rapidly advancing climate catastrophe and the extinction of many species, including us humans.

3. In this state of global emergency, we want our art works in some way to register OUR Red Lines, to critique the global status quo.

4. There is plenty of evidence (from across the world in many eras) that mass movements of citizens look to their artists, songwriters, performers and writers (etc) for inspiration, for validation of big social causes and for confirmation of their own positive ideas about change : Personal, Social, Cultural and Political.

5. Red Line Art Works is a home for Art and Artists who have the intelligence and wisdom to critique the status quo, and the courage to make art with a conscience. Artists from around 45 different countries are shown in our Main Gallery here, and there are more in our articles about 'Art & Politics' here. We believe that now is a time when Artists and Creative people can contribute to a more positive future, through their exceptional voices and powerful art. What could be a more important role for art and creativity in the present era ?

6. History shows that artists can clarify, crystallise and communicate things as nobody else does. Art can cross borders, generations and languages. Throughout the centuries some artists have not been content for their work to remain ‘silent’ on the big issues. They have registered big global concerns in their work (examples here).


WHAT CAN THE ARTS AND CULTURE DO ?

7. If we are lucky enough to live in countries with relative freedoms and are lucky enough to have received an education or to value the arts and culture in our lives, then we are among the most privileged people in the world - and with that comes responsibility. That is why we at Red Line Art Works ask artists and creative people across the world to ‘speak up’ in their art works. These are potentially more powerful than thousands of words. Now, in the face of global emergencies and mass extinctions it is imperative that we 'speak up, 'or even shout.

8. Changes in the culture, among the mass of the people, are essential to bring about political and economic change on the scale that is now needed. There is plenty of historical evidence from around the world that big pressure from the mass of the people is sometimes the ONLY thing that can bring significant positive change to political systems and governance.

9. In some cases, citizen pressure on politicians and institutions has had to be sustained for years (even generations) before the desired change was eventually made. Think of the fall of Apartheid in South Africa, the fall of the Soviet Union and of Communism in eastern Europe - and many more big changes. These were achieved only after decades of struggle by tens of millions of people, actively supported by those artists who had all along been critiquing the status quo, making the invisible visible, inspiring people, validating the case for change.

10. Mass movements of citizens look to their artists, songwriters, performers and writers

etc - for inspiration, for validation of big social causes and for confirmation of their own ideas about social and political change. The Arts can be incredibly valuable in inspiring and supporting people. When people are being failed by their politicians, institutions and media then the importance of Art and Artists can grow. The cultural centre of gravity can shift, reputations can rise, legendary art works (there are some examples here) can emerge to inspire and sustain people through periods of great difficulty and big change, towards a more positive era.

11. Artists cannot expect to leave all of the struggle to others and just selfishly take the benefits when the change comes. That is no way to ensure respect for your art or for yourself. When artists (or Curators, or Arts Institutions, etc) keep ‘silent’ about these big concerns in their work, they are not simply ‘forgetting’ them - they are actively ignoring them. That signals complicity with the wrongdoing, the wrongdoers and the injustices which are endangering humanity and our only planet.

12. The world’s governments and corporations are driven by the greed of the wealthy and privileged global minority. Their immense wealth and power is being used to coerce societies, communities, families and individuals, and to degrade our planet. These elite interests are closely served by some parts of the 'western' art world which are eager to align themselves with wealth, privilege, status and power.

13. Members of these rich elites often try to 'buy' social or cultural approval by sponsoring the arts or buying art works. Some Artists, Curators, Galleries, Institutions are keen to take this dirty money. Too many of the 'gatekeepers' in the art world are willing to overlook the role of these elites and keep any serious critique of these elites out of their work in the arts. They already look bad now and history will not judge them well.

14. We repeat : Red Line Art Works is a home for Art and Artists who have the intelligence and wisdom to understand and critique the status quo, and the courage to make art with a conscience.
THE GLOBAL CONTEXT FOR RED LINE ART WORKS

15. Red Line Art Works is a global Arts project at a time in history when humanity faces an unprecedented set of urgent global concerns mainly stemming from (or made worse by) neoliberal capitalism or communism.

16. Previous generations of artists (or some of them) have faced up to big issues in their art work (see examples here). Not all of today's artists want to do this, even though humanity (all of us) are in a global emergency and facing an unprecedented set of global concerns. Being 'silent' about the world's big problems is being complicit with and helping those who are creating these problems.

17. The Arts offer a wonderfully diverse spectrum of work and ideas from across all cultures - our purpose is to encompass and promote them all, from anywhere in the world, as long as they critique the global status quo or the lack of justice.

18. These Global Concerns reflect decades-long patterns of human wrongdoing and most are getting worse. And they are all connected - we only have one world and we must not waste this. Without big system changes, all the major global issues (such as wars, conflicts, climate change, financial instability, poverty, famines, etc) will continually arise from the current system. Continuing with the Status Quo is not an option if humanity is to sustain itself and life on this planet for future generations.

19. For these global concerns to evolve from an emergency into a full scale global catastrophe very soon we humans just need to change nothing - continue doing what we are doing now. Anyone who remains silent about this becomes part of the problem. So, we believe in speaking up - specifically through art with a conscience.