One of the many challenges thrown up by reading Amitav Ghosh’s extraordinary book : The Great Derangement: Climate Change and the Unthinkable (University of Chicago Press, 2016) is that it shows very clearly the need to accept and engage with the quite extraordinary degree to which ‘we’ (those who inhabit the dominant culture of the Anglosphere) have been either misled or just plain lied to.

It is true that much of what he writes brought into view, as fact, material that had been present in my own peripheral vision. But it did this to a larger extent than I’d have wanted to acknowledge as an ill-focused sense of unease, even dread, rather than something to be confronted head on. His ability to link apparently disparate areas of knowledge makes the causes of that dread both immediately graspable and crystal clear as to its causes and consequences.

The challenge closest to me, as someone involved over a working life-time in the visual arts, education, and the cultural field more generally, is that Ghosh’s book required me to reconsider everything I had done professionally. (In this respect it elicits exactly the same response as Jem Bendell’s article Deep Adaptation: A Map for Navigating Climate Tragedy).

Ghosh, as a novelist, is largely concerned with the Western novel’s failure to look critically and imaginatively at an economic system not only predicated on isolation, but designed to produce further isolation. But the implications of his argument for all the arts requires urgent consideration, however uncomfortable that will be for many people. While I find it profoundly disconcerting, at the age of sixty-nine, to be faced with the task of revising a great many assumptions - some personal but more collective - there have been plenty of indicators that this needed to be done.

In 2014 the performance artist Andrea Fraser claimed that artists are not part of the solution to our current crisis, as many in the cultural field are beginning to assume, but contribute to it. Ghosh’s argument suggests that she is very likely right, at least in so far as by ‘artists’ she is referring to those who buy into the myths of a Western art world inextricably tied into the culture of possessive individualism. An art world that is, in my view, simply incapable of responding to Bruno Latour’s suggestion that we cannot start to address our current situation until ‘progressives’ begin to acknowledge the reality of those – often located in rural or marginal communities - viewed as holding outmoded, reactionary, traditionalist, or parochial views of reality. For the Western 'Art World' – the exclusive industrial/cultural complex that’s intrinsic to the promotion of the culture of possessive individualism - to do that would be to require a re-writing of modernist (Western) art history.

There was, of course, nothing particularly new about Andrea Fraser’s claim. It echoes, for example, issues that had been raised twenty years earlier by the artist-turned-anthropologist A. David Napier, the liberation psychologist Mary Watkins, and the writer, poet and art critic Thomas McEvilley. Issues that Ghosh now firmly locates within the culture, history and politics of 'The Great Derangement'.

Ghosh concludes by expressing the hope that the struggle we now face in addressing that Derangement will result in an ability to see the world more clearly and to transcend the isolation in which that derangement has trapped us. And, almost as an afterthought it seems to me, his final sentence expresses the hope that the resulting vision will be set out by a transformed and renewed art and literature. It’s a hope I can only share, but one tempered by the knowledge that there is an enormous amount of work – particularly our own psycho-social re-education – that will need to be done first. It’s not easy to summarise what that work entails. Let me just propose that it will include the following:

1. Setting aside the assumptions that flow from the monolithic, heroic ego, the engine at the heart of possessive individualism;

2. Finding ways to heal the Cartesian splitting of self from other, mind from body, the perceptual from the imaginal, the material from the spiritual, the literal , supposedly ‘outer’, world from the ‘inner’ world of spirit and imagination, and so on.

3. Embracing and celebrating an ensembled self that accepts that it is constellated by multiple, heterogenous, connections, attachments and relationships. A self aware of the implications of its own multiplicity and of being in a world in which it finds itself becoming as a constantly shifting ensemble of selves, skills, allegiances, opportunities, and obligations.

I now want to suggest two visual artists in Ghosh’s homeland who might serve as examples of ‘good practice’ in terms of developing a different approach to the relationship between art and the new ‘Terrestrial’ politics Latour calls for. The artists I have in mind are Arpita Singh and Gulammohammed Sheikh, both of whom are what might be called ‘senior’ figures in the visual culture of India.

In the current context of rising Hindu Nationalism, these two artists’ backgrounds are particularly significant. Arpita Singh’s Hindu family originally lived in what is now the Muslim state of Pakistan. Gulammohammed Sheikh, by contrast, is from a Muslim family in Gujarat, a state subject to extreme anti-Muslim violence over many years. Both artists were ten years old at the time of the Partition of British India in 1947. What links them is a common ethical concern to re-locate, redefine, and reinterpret a range of socio-spiritual values inclusively, via a non-sectarian imagination that challenges the toxic consequences of a political culture that has blended the materialist values of Western possessive individualism with the narrow dogma of Hindu nationalism.

A great deal of what I admire in Arpita Singh’s work (and something that aligns her directly with Amitav Ghosh’s thinking) is indicated by the title of an etching she made aged 70, in which she envisages an elderly couple in the context of shared social concerns about ageing, friendship, mobility, food and violence. It’s title is This Could be Us, You or Anybody Else. A sentiment that could not be further from the aura of exclusivity on which the work of the artists referred to by Andrea Fraser depends so heavily. 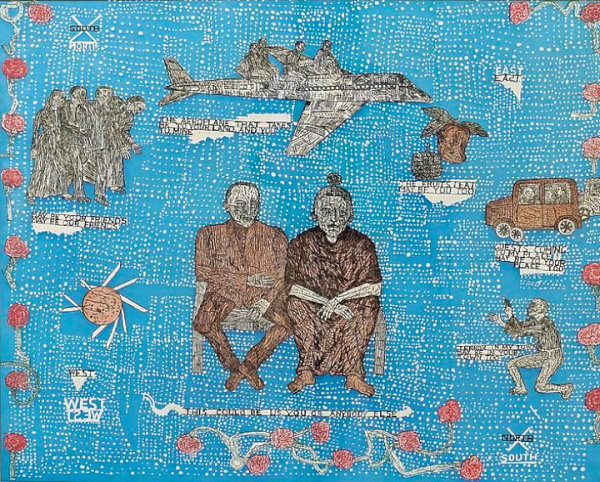 Singh’s childhood displacement from rural Bengal to urban Delhi has informed her sense of the precariousness of any assumed ‘at-home-ness’. Any sense of ‘home’ in her work usually coheres around a remembered or imagined ‘elsewhere’, or else the fragile continuity of everyday practices. Her earlier work articulated the often mundane conditions of our mortality - the realities of aging, frustrated desire, the fear of social embarrassment and being ‘left behind’ by dead partners; of mourning, violence, and death. In the twenty-first century, however, she has increasingly engaged with the interlinked concerns of environmentalism and political terror, while still challenging negative perceptions of the elderly as collectively politically reactionary and a drain on social resources.

As an image-maker, I have long been fascinated by those old pictorial maps which suggest we understand space in terms of what the political historian Doreen Massey calls a “simultaneity of ‘stories-so-far’”, stories that can invite us to re-consider notions of identity, home, and belonging. Gulammohammed Sheikh’s work seems to me committed to weaving together different stories-so-far across space and time. Like Arpita Singh, he draws on his experience of the pre-Partition India of his childhood, where different belief systems coexisted within a more heterogeneous popular culture. Much of his work protests Hindu nationalism’s destruction of that culture.

In his artwork 'Kaavad: Travelling Shrine: Home', Sheikh ‘houses’ the richness of that popular heterogeneous culture. A kaavad is a portable folding wooden shrine used by nomadic storytellers to reveal images of different gods, goddesses, saints, local heroes, and patrons as their narrative unfolds. For Sheikh, however, it serves as a secular device, as: "…a site for atonement for innocent victims of the senseless violence of our times…a motif of remembrance, of memory”. In short, for the sense of social justice that has to be inseparable from any meaningful engagement with our deeping environmental crisis. 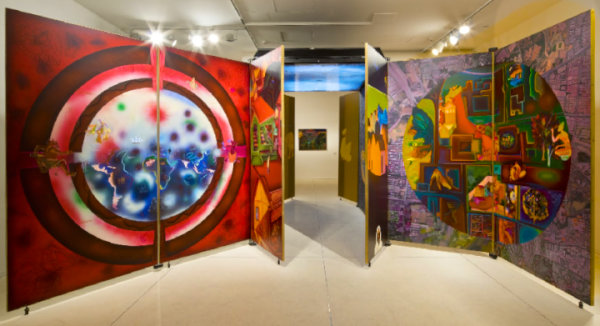 Through this work he enfolds figures from radically different backgrounds and traditions - the artist’s mother, medieval Hindu and Sufi saints, an anonymous sweeper, the Chinese Buddhist scholar Shoriken, St. Francis, Gandhi, and the prophet Mohammed – all brought together within a single coherent, if multifaceted, space. Sheikh re-imagines this space as a non-believer, but one deeply concerned about the failure of ‘liberal humanist’ cultural education in a fractious, and fractured, ‘post-secular’, world. The work is a complex relocation of old narrative themes (and the method for unfolding them) within a new, cosmopolitan, multiverse; both a ‘safe space’ for debate and a response to attacks aimed at stifling dialogue between religious and secular positions in Indian institutions. Over many years Sheikh helped create, and then defend, a secular educational space for art students. In 1992, however, he was expelled from his academic post due to political pressure. Again, there is a close parallel between the radical inclusivity regarding cultural and spiritual of Sheikh’s work and the tentative conclusions set out at the end of Ghosh’s book.

I suggest that the work of Arpita Singh, Gulammohammed Sheikh, and Amitav Ghosh offer those living and working within the privileged world of Western cultural norms a valuable alternative vision of what cultural work might now involve, particularly in relation to the psycho-social self-re-education indicated earlier. Namely, models for evoking and celebrating inclusive senses of being-in-the-world; of being an ensembled self that accepts and honours its multiple, heterogenous, connections, attachments and relationships to both human and non-human beings, with all the responsibilities that flow from that acceptance.


Iain Biggs : Iain works as a free-lance researcher, maker, writer, and mentor with a twenty-year concern for exploring the relationships between people and ecologies of place, community, memory, and identity through deep mapping. Formerly a Reader in Visual Art Practice and Director of the PLaCE Research Centre at UWE, Bristol (England), Iain is currently an Honorary Research Fellow at the University of Dundee (Scotland), and a Visiting Research Fellow at Bath Spa University (England). Since 2014, when he held a Moore Institute Visiting Fellowship at the National University of Ireland, Galway, he regularly worked in Ireland. He is currently supporting arts-led projects in Wales, Scotland, Ireland, and England as a doctoral supervisor and mentor.