Painting : The Execution of Maximilian by Edouard Manet (1867-9) 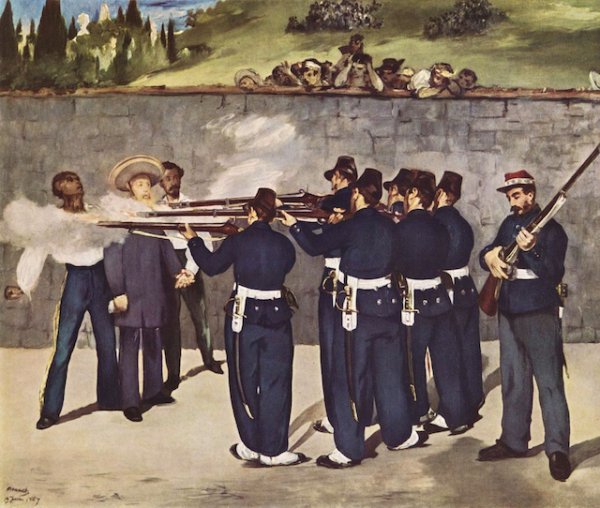 Edouard Manet (1832-83) was a French painter and one of those most prominent in the transition from realism to impressionism. Although born into a relatively privileged family and social background he also viewed (and painted) social life in Paris and France with a politically observant and critical eye. Like many artists he was politically observant in his work, though not an activist outside of his art.

Like all Parisians at the time he was affected by the experience of the Paris Commune. It arose from growing discontent among Paris workers and the poor. They wanted a more just way of managing the economy and politics. The Commune was a brief (March to May 1871) revolutionary socialist attempt to take control of Paris. It was brutally suppressed and put down by the Government and Army, with many thousands killed.

After the Paris Commune, in 1873 he wrote to a friend : “I never imagined that France could be represented by such doddering old fools…” and later to the same friend “What an encouragement all these bloodthirsty caperings are for the arts ! But there is at least one consolation in our misfortunes : that we’re not politicians and have no desire to be elected as deputies”.

Again, this reflects his self-concept as an artist, not an activist. This brings us to the story of Manet's painting of 'The Execution of Maximilian'.

Well before the Paris Commune, in 1851 Louis-Napoléon Bonaparte had been prevented by the French Constitution from running for a second term. So he organised a coup d'état and in 1852 took the throne as Napoleon III, becoming the self-appointed first President of the French Second Republic. (Maybe this reminds you - like us - of various modern-day self-appointed national 'leaders' around the world).

He wanted to grow French power in Europe and around the world and was keen to have access to silver, mined in Mexico to finance his empire. He built a coalition with Spain and Britain to push forward a common interest under the claimed foreign policy of expanding ‘Free Trade’. (This should sound familiar to modern ears).

However, in 1861 Mexico suspended interest payments to foreign countries (including France, Britain and Spain). While the American Civil War (1861-5) was taking place America’s attention was not on its neighbour Mexico. In 1862 Napoleon instigated a military invasion (this may also sound familiar to modern ears) of Mexico.

The invasion of Mexico was initially by the three European countries but when Britain and Spain realized that France intended to seize the whole of the country, they withdrew. France then invaded Mexico with its occupying army, ended the Mexican Republic, deposed the President and set up a French-run Catholic empire, supported by the Mexican upper classes, nobility and the Catholic church. Over the next three years Mexicans opposed to the invasion and oppression, and still loyal to their former republic, fought the French military to try and restore their republic.

In 1864 the Austrian Archduke Ferdinand Maximilian, a Habsburg emperor, was installed by Napoleon III as a ‘puppet emperor’ in Mexico. In 1865, as the American Civil War was ending, the Americans began assisting the Mexican ‘freedom fighters’ with arms and other military aid. By 1867 the occupying French foreign empire in Mexico was collapsing. Maximilian was captured by the Mexican forces, court-marshalled and sentenced to death. He was executed a few weeks later along with two French military leaders.

Conscious that all of this raised concerns about French foreign and domestic policy, between 1867-9 Manet created three large oil paintings (two are shown on this page), one smaller work in oils, and one Lithograph, all depicting ‘The Execution of Emperor Maximilian’. All his versions of this work were banned from showing in France at the time. It is known that Manet supported the Mexican republican cause. 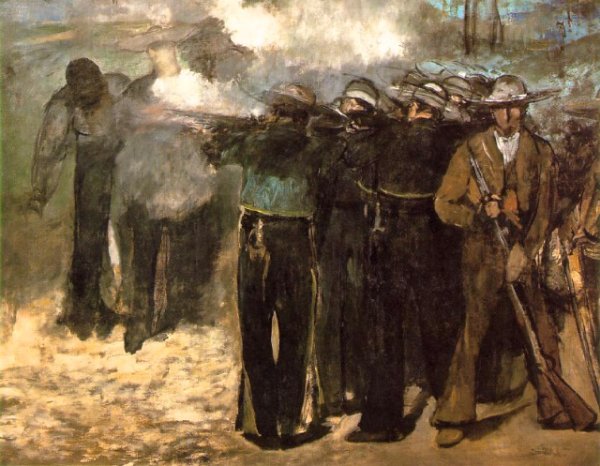 Manet's support for the Mexican republican cause may not be the only reason that he painted this subject. He is known to have been inspired by a Francisco Goya painting of 1814, ‘The Third of May’ which also features an execution by firing squad. So, his motivations were partly social and political, and partly artistic / technical.

He was attempting to achieve (as Goya had) great emotional impact in portraying one of the horrors of war and in this sense Manet’s work is a critical look at war. Perhaps it both looks back to Goya and forward to the way some (not all) modern artists have an ethical, critical stance towards war, placing ethics and morals far above shallow patriotism or nationalism. In this sense Manet's paintings look forward (for example) to Picasso and his ‘Guernica’.