Painting : The Massacre at Chios by Eugène Delacroix (1822)

This painting, created in 1824, was only the second major oil painting by the French artist Eugène Delacroix. It deals with a massacre on the island of Chios in the Aegean sea, close to the Anatolian heartland of the Ottoman Empire. Tens of thousands of Greeks were killed by Ottoman troops.

The painting is more than 4 meters tall and 3 metres wide, and shows some of the horror of the destruction visited on the Island. A frieze-like display of suffering characters, military might, ornate and colourful costumes, terror, disease and death is shown in front of a scene of widespread desolation. 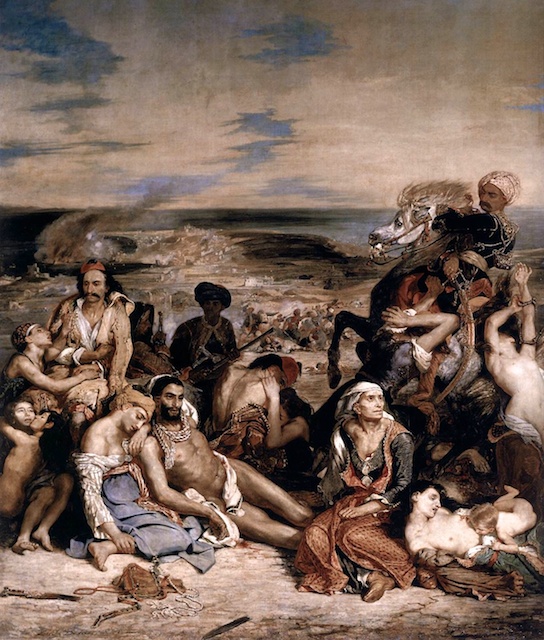 During the Greek War of Independence in 1822 Greeks from neighbouring islands had arrived on Chios to encourage the Islanders to join a revolt as part of the Greek efforts to gain independence from the Ottoman rule.

In response, a large force of Ottoman troops landed on the island, razed villages and killed thousands over a period of a few months. It is estimated that 52,000 were massacred, 52,000 were forcibly deported into slavery, and 21,000 managed to flee. Only 2,000 people remained on the island after the Massacre.

These events provoked international outrage, and led to an increase in support for the Greek cause worldwide.

The painting, unlike most paintings of conflict and war until then, does not include a ‘heroic’ figure. It is not a piece of propaganda for a wealthy patron, king or leader. It was not commissioned by any such person to glorify themselves or their authority. That was very unusual because, for centuries prior to this (before mass readership) 'art' was mostly a tool of the wealthy and powerful elites.

In previous centuries many artists served as propagandists for wealth and power. This concept might appear to be very different from today's Artworld's view of its role. However, you can look around now and still see many instances of art in the service of wealth and power, as (sometimes naive and dumb) propaganda for powerful elites.

Delacroix's painting was completed and displayed at the Salon, Paris in 1824 (the official art exhibition of the Académie des Beaux-Arts) and now hangs at the Musée du Louvre in Paris.